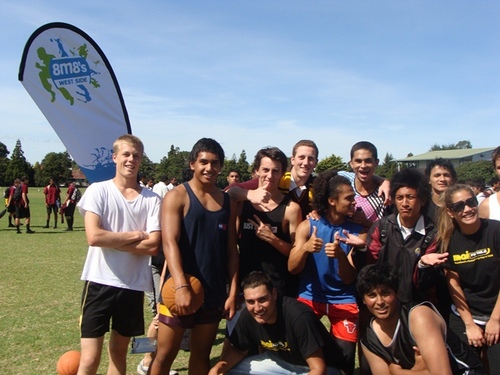 8M8s: a fun way for teens to start participating in sport

Overview
Waitakere secondary school students have some of the lowest levels of participation in sport in New Zealand. That’s concerning but a programme called 8M8S (‘Eight Mates’) is starting to bring positive change. 8M8s’ success is based on high levels of on-going engagement at all levels, from organisers to participants.

At the end of 2012, five Waitakere secondary schools were involved in 8M8S. Hundreds of 15 to 18-year-olds who previously did no sport are now regularly playing short, fun versions of cricket, basketball, netball, and AFL in a welcoming and social environment. Better still, fellow students who were already active in sport are helping to coach and run the 8M8S programme.

The success of 8M8S has seen organisations in other regions ask about launching the programme. Gabrielle Gofton, who was with Sport Waitakere when 8M8S was established, reckons the programme would work just as well outside Waitakere, including with different age groups if that were a focus. Gabrielle would be delighted if 8M8S benefits other regions, and is happy to see the name and logo freely shared. This case study briefly outlines how 8M8S began, and how it works.

The Strategy
Sport and recreation providers should consider the needs, wants and perspectives of the children and young people they are working with as a central element of programme planning. This should include:

How it began
Before 8M8S was launched in 2010 (as “Young Westies in Sport”), Sport Waitakere surveyed over 3,200 Waitakere secondary school students to find out what sports they played and why; and for those not playing sport, why. “The top motivator to playing sport is having fun with their friends. The top reason for not playing is fear of letting friends down. Transport is also a barrier,” says Gabrielle. Armed with information about what sports would appeal to students, she talked with Auckland Cricket, AFL NZ, Basketball Waitakere City, and Netball Waitakere; as well as with Auckland Council and other organisations. That led to a vision of setting up a social sport concept – sport based on having fun.

How it works
The sports organisations each worked out how to modify rules to create a 20-minute game, with eight players a side. Each participating school has one 8M8S afternoon a week, held after school. Students play one 20-minute game in one sport, then a second 20-minute game in another. The number of teams playing at once simply reflects how many students turn up on the day (with 16 players per game).

It is important that those who are skilled and experienced in sports don’t also join in and play 8M8S. The programme covers this off in a deft way. At each school, those already involved in sport are invited to become student leaders who help to plan, coach and run 8M8S.

These student leaders don’t only get the satisfaction of helping. They receive training to gain an entry level coaching qualification. Further, there is a modest fee ($2 a session) for playing in 8M8S, and this money helps pay the student leaders’ school sports fees.

Another noteworthy success of 8M8S Waitakere is the steering group, which represents all the organisations and schools involved. “You now get sitting round the table on a regular basis the school sports coordinators, regional sports organisations, Auckland Council and College Sport Auckland. They’re all talking to each other,” says Gabrielle. “The spinoff is bigger than just 8M8S, it’s mainstreaming sport.”

8M8S is capturing many students who were previously missing out on sport. Sessions at school have numbered anywhere from about 30 to almost 100 participants. It’s still too early for comprehensive results data, but indications are that in the participating schools, the level of involvement in sport has increased.

Outcomes
8M8S has found a strong need in Waitakere and is building on that base. It is popular with school leavers and work is underway with Auckland University as part of a sport beyond school programme.

It has also found its way into Sport Auckland’s area, with three schools there now involved.

“Staff turnover, other things are always changing. There are new ideas and new kids getting involved. It’s important that relationships are always being worked on and people are actively talking with each other,” she says.

Contacts for further information
Gabrielle Gofton now works for Auckland Council, though she is still involved in the 8M8S steering group. To find out more about the programme, please contact Gabrielle by emailing gabrielle.gofton@aucklandcouncil.govt.nz.