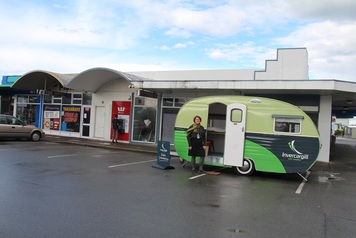 ​Using a purpose-built caravan as a mobile venue to actively engage with communities isn’t something that leaps to mind when many people think about engagement tools. But an engagement caravan is a tool that Invercargill City Council has invested in – and one that’s working well for them, as Invercargill City’s Communications Manager Eirwen Harris and Policy and Reporting Analyst Kari Graber explain.

“The idea of a consultation caravan popped into my head when Council was planning public consultation over the CBD upgrade,” Eirwen Harris says. “We needed a venue where we could invite people to show them the plans and ask for feedback. A vacant shop was a suitable venue for the CBD consultation, but there was considerable expense and staff time in setting it up for a week and then dismantling it. We ended up doing this twice over two years and the first time we even had to paint the interior of the shop and fit it out with suitable display boards, tables, etc. It cost a lot of staff time and money. Plus it was stuck in the one spot. And it couldn’t be reused because it belonged to private owners and was up for rental.”

​“The beauty of the consultation caravan is that it is already set up and is portable – so we can go to where the people are, rather than expecting them to come to us. It can go into local communities and suburbs; or be set up at a special event, or the side of a road, or in the CBD. Our city’s area is a mix of rural areas, country towns and also the port settlement at Bluff. Some of these locations are distant from the CBD and we’ve made friends by taking Mildred to meet with them where they live, rather than expecting them to come into the city to meet with Council representatives,” Kari Graber says.

“Even in Invercargill itself we have communities where there are people who don’t drive or lack access to the internet. Parking Mildred at local shopping centres in these parts of town provides a conspicuous and informal means of connecting with these people.

“We advise people through Facebook, Twitter, newspapers and radio where and when Mildred will be out and about. And we’ve received really good feedback about Council’s willingness to make the effort to go out to people, instead of relying on electronic or written communications.

“Although we may be using Mildred to engage on a specific topic, such as our Long Term Plan, we’re also able to deal with other matters that people want to discuss. Examples we’ve encountered have included concerns about street lights not working and a Māori lady wanting to know about Council’s policy on gathering flax from reserve land. People seem to really appreciate that Council follows through for them.

“Invercargill isn’t a wealthy community, with many people on low or fixed incomes and an aging population. So while the internet and social media are important platforms for public feedback, not everyone in our community has access to them and nothing beats face-to-face communication,” Kari Graber says. 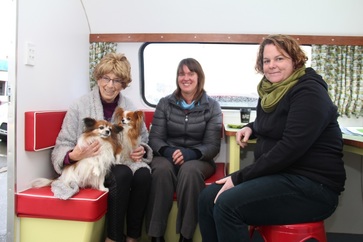 ​“We wanted our caravan to be eye-catching and inviting but practical and fitted with modern technology, so we took advice from a local caravan builder on how to achieve this. Originally, we thought we’d buy an old caravan and do it up; but to meet our needs (walls strong enough to support a television, a computer area and more room for people to sit) it would have had to be gutted and rebuilt. So we had a new one built. Our caravan has bench seats to maximise the number of people who can sit in it, and a removable table if more space is needed,” Eirwen Harris says.

“Even though it looks retro, it is a 2015 design called Southern Belle. It is traditional for new caravans to be given a nickname and Mr Horsham called her Mildred, an old-fashioned name in keeping with the retro Southern Belle design. Mildred was also the middle name of our graphic designer, who chose the colour scheme for the fit-out,” she says.

Mildred is designed so that people can be invited in from the weather and sit down in comfort to participate in discussion, watch presentations, access the internet and provide feedback.

The total cost of the consultation caravan project, for construction, fit-out and equipment was $39,566. (This included the cost of the generator to power the computer, electric jug and television)
“We expect that Mildred will be used for decades and the cost compares favourably with the expense of printing and delivering just one document to every household in our city, which is around $30,000.

“The one thing I’d do differently next time is explore other electrical supply options, rather than using a generator. The generator is noisy but a power source is needed,” Eirwen Harris said. 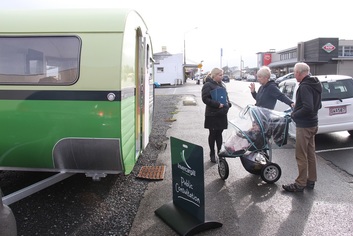 ​“We’re aware that people, particularly those with families, are increasingly time poor and engaging with Council isn’t high on their lists of things to do, unless an issue is particularly contentious for them. Going to where they are and providing an informal point of contact helps to overcome that. It also provides us with a way of connecting with other hard-to-reach groups, such as young people,” Kari Graber says.

“The first outing was to the local dog park, where we set up to consult over the new Animal Control Bylaw – it was great to be able to go out to where the very people we wanted to hear from congregate. Some even brought their dogs into the caravan. The dogs were very well behaved and we were happy to have them there.

“Mildred was stocked with hand-outs and allowed for useful discussions to be had with dog owners. Being able to go to where dog owners were allowed us to connect with about 50 of them.

“We have also used it all round our district to consult on the Council’s Long Term Plan, the Representation Review (which decides how the Mayor and Councillors are elected) and even set it up outside one of our housing complexes when our housing staff wanted to consult with their tenants. It means we could set up on their doorstep and they didn’t have to worry about the cost or logistics of travelling to meet us. Our Waste Management people are also planning to use it for a roadshow.

“Mildred is charmingly disarming and people really warm to her and Council staff accompanying her,” she says.

“Anyone in Council can book it. We have a fleet car that we use to tow it – and have a group of staff whom we trust to move it. It is stored in one of our Council sheds along with the motor vehicle. We have a cover for it to keep it clean,” Eirwen Harris says.

“We also adhere carefully to health and safety rules, with cones, first aid kit and other requirements met.

“Even if people don’t participate in the consultations, we get very good feedback about it being seen out and about – because of its distinctive look, everyone knows it belongs to the City Council. Surprisingly, another Council in the area has asked to borrow it!

“The only downside is when we have really bad weather – windy, or stormy, and our winters are very cold. So far there has only been one day, where we had to abandon trying to consult in the caravan and moved to an inside venue. It was just lucky that the Rotary-hosted event we were catching people from was run in a Council venue, and the chief organisers were off-duty Council staff, who were happy to let us move inside,” Eirwen Harris says. 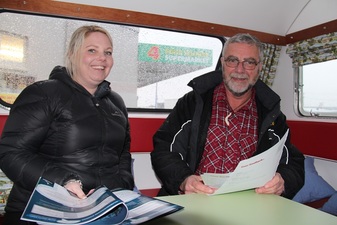 ​Mildred doesn’t get used much over winter –winter days in Invercargill can be anywhere from 3 degrees to a “warm” 15 degrees – but still too cold for people to spend long stints in a caravan.

“We are looking to use it in future for:
“As well as providing a useful meeting place, Mildred also provides a base for staff to work.

“Mildred is WiFi enabled, so staff are able to access the Council’s data systems and the internet. This lets them find things out for people with enquiries and also to catch up with their work.